Russia climbs out of the slump, long-term investment opportunities surfaced.

One of the few highlight emerging markets.

In the book “Shooting for DJI 30,000  – The Century’s Great Market Opportunity that You Shouldn’t Miss” that published in 2014, we were not so optimistic about Russia’s economy and capital markets development. Around January 2015, we once again reminded everyone in our column that Russia was not an ideal portfolio for investing. Based on Chart A, you can realize that there is a reason why we were not so optimistic about Russia. Reading the ROI since 2014 or 2015, Russia was way behind U.S. and Japan stock market. Even comparing to the emerging market such as Taiwan, Russia’s performance was under as well. Three years ago, if you invested your capital in Russia stock market, you would receive a nearly minus 20% ROI, yet, the stock markets mentioned above had about 15-20% ROI (interest profits excluded). The gap is too obvious to ignore, so being cautious is indeed necessarily.

However, as the model we have been keeping all along, “every investment target is viable when the price is right.” When Russia has encountered a serious disadvantage in market (oil price drop), and the worst case scenario was over, then, the opportunity for investing will begin to surface. We believe, that in the next year or two, Russia will be one of the few highlight emerging markets that is worth investing. There are four major reasons:

A. Imports statistics showing Russia is not weak in domestic needs, improving current account will reverse the trend of Ruble depreciation.

Before going into details of Russia’s statistics, it is crucial to understand why we were quite negative about Russia over the past few years, and it would then be understandable of why we are focusing on Russia again. The reason is, a great amount of Russian government’s income, corporate profits, and GDP growth are resulted from the oil and gas sector. When these two major commodities experience a heavy price drop, it would cause the government income, corporate profits, and the wealth of the people to decrease significantly, and then the consuming capacity of the whole nation would drop enormously. The immediate effect would be a severe decline in exports, and also cannot afford the imports, thus begins a serious economic crisis. The current account would keep getting worse due to trading and capital flight, and in the end the currency would depreciate drastically. The price of imports would then rise high and cause hyperinflation, and the foreign capital flight would sink the stock market. These are the scenarios that have happened in Russia over the past few years. 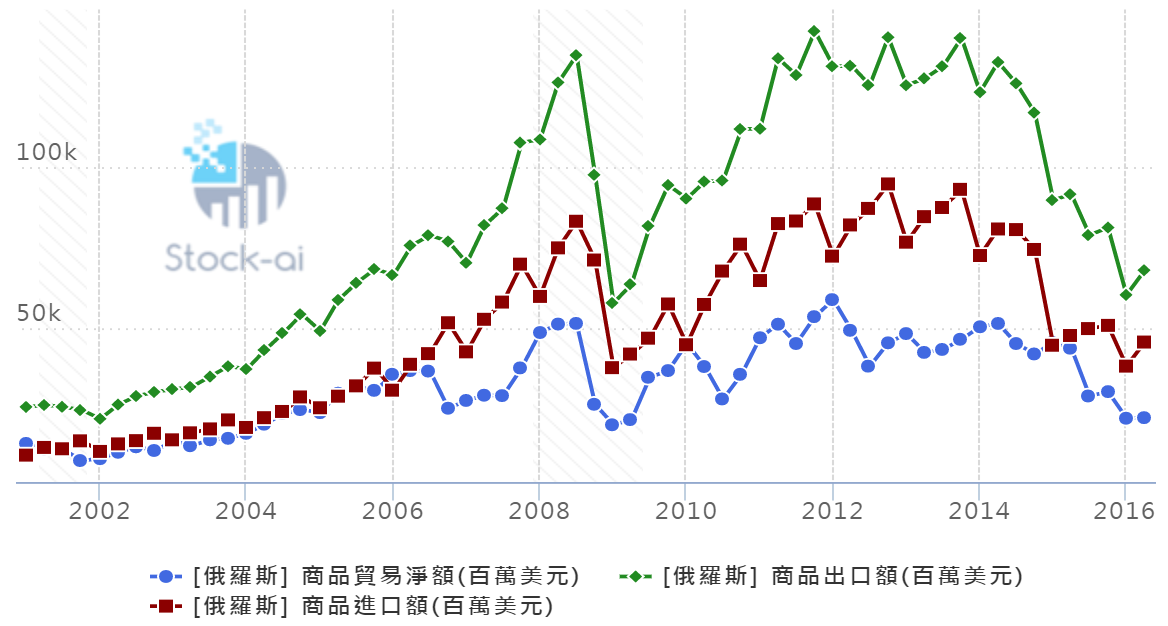 Yet, Russia is starting to get back to the direction of another positive cycle. As the oil price starts rising from the bottom and stabilized, we can see in chart 2 that the exports of Russia start to climb out of the bottom. One more thing worth noting in the chart above is the imports of Russia. Since hitting the bottom at Q2 in 2015, it did not keep falling to bottom until Q4 last year like the exports, but rather stabilized around the bottom. Like what we said about China before, imports statistics is an important indicator of the economic strength of a nation. This also means that the domestic needs of consumption did not collapse in Russia, it has hit the lower level and started to stabilize. Simply put, it is the worst it can be.

What about the future then? As the oil price maintaining steady, the exports of Russia will see a gradual growth from a lower base period. And the slowly appreciating Ruble after the drastic depreciation can also resolve the high import cost. In other words, the current account of Russia can be expected to improve. Once the current account improves, it will help pushing the currency to reduce import cost, attracting foreign capital back to Russia, and creates a positive cycle for capital market.

B. Russia inflation cools off, entering a rate reducing cycle this year.

Improving exports and current account, plus the trend of Ruble appreciation, will first let the high level of inflation in Russia begin to drop. Judging from chart 4, we can see that in order to deal with the inflation crisis caused by drastically depreciated Ruble, Russia central bank raised the interest rate up to an unprecedented 16.5% level in 2014 (see chart 4). In a sense it did restrain the inflation, but it also took down whole economic capacity. However, the inflation rate has now come to a regular 5% level, and the interest rate is still at 10%, which is obviously too high. Thus, we can expect this year that Russia will have a rate reducing cycle.

Chart 4. Russia inflation rate (blue) vs Russia interest rate (black): the inflation is cooling off, and the rate reducing cycle is about to begin    Unit: %    Source: Tradingeconomics

Is reducing rate beneficial, especially while U.S. is going into a rate rising cycle? In our opinion, it might not be good measures for other emerging countries, but it is definitely very positive for Russia. How so? Since the reason for Ruble to depreciate, unlike other emerging countries, is not about the interest margin, but because of the rapid deterioration of the current account, which is a result of the oil price fluctuation. Thus, once the core issue of current account is addressed, it will stop the currency to depreciate, especially when Ruble is at such low base period. And since Russia went from an irregular high rate environment to a lower rate level environment that can provide constant growth, it will stimulate the economy of needs for investment and consumption, therefore benefit the performance of capital market.

In that case, while other emerging countries are suffering from dealing with the impact due to U.S. rate rise (to follow it or not), Russia has less to concern about reducing rate, since their interest rate is at an unreasonable high level. When the capital becomes more easing, their currency would not depreciate (which is an advantage that other emerging countries cannot copy, since to deal with the impact of U.S. rate rising cycle, emerging countries can only raise the rate as well, and it would destroy the economy capacity of growth or burst the bubble; Yet, if they don’t raise the rate, they would be facing the crisis of currency depreciation due to capital flight). This will cause a capital flight of investments in emerging markets in the global scene, and it would become a long term opportunity to invest in Russia stock market.

C. The economic fundamentals of Russia are steadily growing strong.

The reasons mentioned above focus on the international capital flow, oil price effect, and currency policy, the third reason will reveal to you the fundamental reason to invest in Russia, which is that the economy in Russia cannot be any worse, and is heading towards a recovering cycle. Based on chart 5, the industrial production MOM of Russia has only shown negative growth in 3 months over the past 12 months, and are all shown in the first half year, while in second half, there is a 6-month consecutive growth, and the growth is speeding up as well.

The good economy performance will then attract better foreign capital to invest and increase the confidence of corporate capital expenditures, which is the current positive cycle that Russia is entering.

D. Russia stock market is the most underrated market in the world.

The last point that worth noting is, after the current account is improved, the inflation resolved, the economy begins to grow, the currency begins to appreciate, and the foreign capital starts to return, Russian stock market is still at the lowest level regarding of the valuation, which is obviously unreasonable. In chart 7, if we check the CAPE fundamental valuation ratio, up until December 30th, 2016, Russia only has 5.9 in ratio, one of the lowest in all major stock markets. Judging from the PE or PB, it is very low as well. 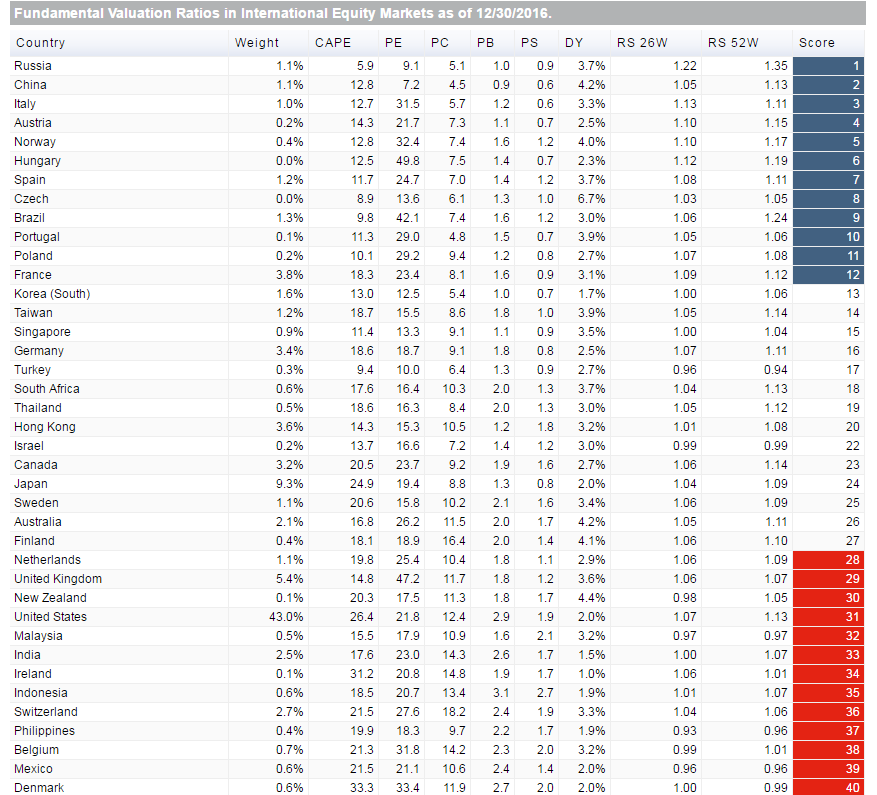 Surely, we have to remind everyone, Russia is still a highly risky area of traditional geopolitics, the policy shift and the ruling of government have a higher uncertainty. Thus, no matter how optimistic we are, still have to be cautious while investing, and don’t overdo it. Be aware of the overall risk, so if there’s an incident occurs, it would be easier to get out! 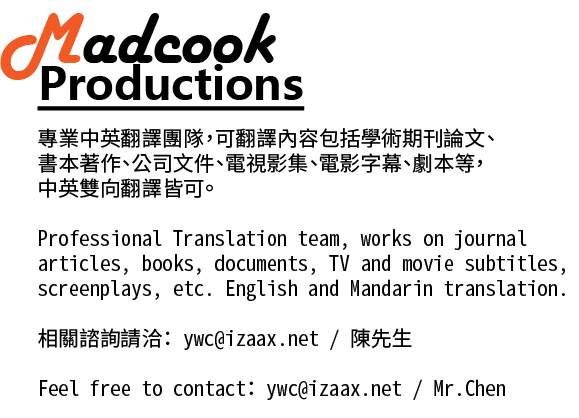