Arriving in December, President Trump’s tax reform has encouraged a new climax in the U.S. stock market. Yet, the tech stocks that have been doing well over the year, are suddenly facing an invisible wall. Looking at Nasdaq, SOX, or tech-stock based stock markets like Taiwan and China, are all performing weak in trend. What does this phenomenon of weak performing mean exactly? Is it the beginning of a downturn of the economy, or a resurfaced opportunity to invest? It is our belief that even though the price of the stock market is rather high, and the economy cycle is gradually pacing towards a later phase, the expanding cycle of tech industry is not yet over. The falling and adjusting of the stock markets this time is a step towards a greater boom. Investors should seize this opportunity and invest with caution.

We are optimistic that in the near future, tech stocks would take the lead again, and become a major force in the later phase of the bull market, for four fundamental reasons:

The first thing we need to look into is the U.S. consumer spending needs, and a prior background knowledge needs to be addressed here first. This article will not be discussing market needs other than U.S., and for a reason: The current global consumer spending increase, especially the technology products sales, is basically driven mainly by the U.S. We can see it in Chart 1, though China, Europe and Japan, and other emerging markets are also with enormous economic volume, when looking at the volume of domestic consumer spending, they still have a certain gap comparing to the U.S. (The domestic consumer spending total in U.S. roughly equals to China, Japan, Germany, India, Britain, and Brazil combined). In other words, the status of U.S. domestic consumer spending alone is enough to determine the trend of global consumer needs. Applying it to the analysis, as long as we can ensure the exact trend of U.S. consumer spending, pairing it with the leading role of U.S. in technology research and development and sales, we can have a better understanding of the layout of the global industries. Thus, there is no need to do other pointless analysis. 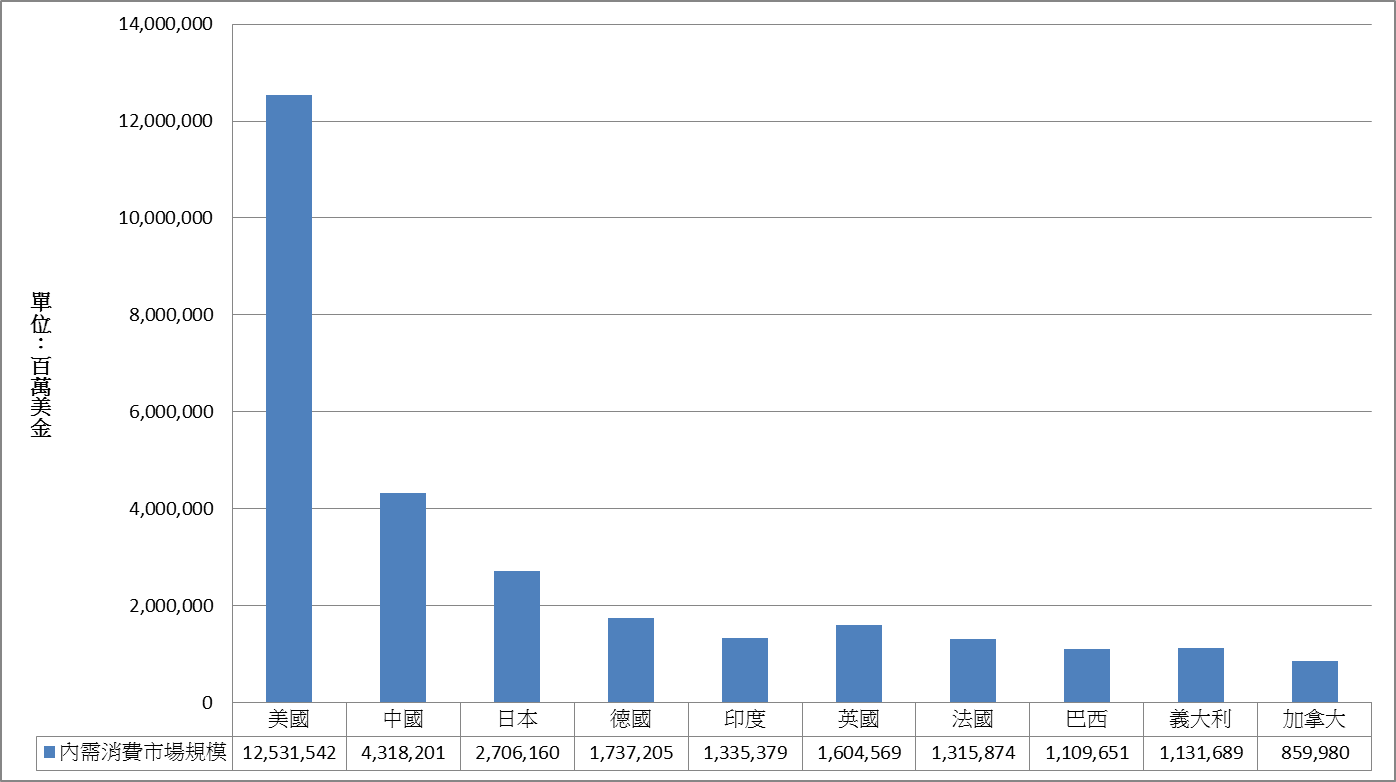 Chart 1: In 2006, the volume of U.S. domestic consumer spending alone is 44% of the top 10 countries combined.  Unit: Million of Dollars  Source: Euromoniter International

Looking at Chart 2, U.S. has gone through a stronger Q2 and Q3 in economic growth (at 3.1% and 3.3%), yet the growing pace is still going. The latest sales report in November has indicated that the domestic consumer spending has come to a high spot that is rarely seen over the past few years, with YoY growth at 5.8% (the YoY in Chart 1 indicates the advance real sales YoY that has deducted inflation influence, still the over 3% growth is the highest over the past three years). The consumer spending will be even stronger coming into the shopping season, meaning that the GDP in Q4 will undoubtedly reach over 3% in three consecutive quarters. How difficult can it be? Last time we have seen a three consecutive quarters GDP YoY over 3% is back in 2005, which is 12 years ago! After a year that President Trump took office, this is a pretty impressive performance in economy.

Would such strong performance in economic expansion benefit the tech industries then? It would all depends on the consumer spending. Looking back in the past 30 years, we can realize that even in the period of economic expansion, electronics sales has its pattern and cycle. When the growth has lasted for 3-4 years, it would arrive at a plateau period and then facing an adjusting phase or even a bigger decline. In a normal economic expansion cycle, a negative growth period as in 2015-16 is a rare occurrence, which is also the main reason that Taiwan stock market (2015) declined into an adjusting phase from the 10,000 point mark. However, starting in the second half of 2016, the needs for electronics has increased drastically, reaching at 6.4% in YoY in November, a best record since 2011. Referring to the past experience, when the trend of electronics sales is certain, the chance of it going the other way is unlikely. Thus, it is safe to say that the technology consuming cycle is not yet over.

Let’s look at another more acute numbers! The important categories of New Orders for Durable Goods (detailed in my publication) that we continue to follow. As in Chart 4, whether the New Orders for Durable Goods of Computers and Electronics Products (Red) that representing the whole industry aspect or the New Order for Durable Goods of Electronic Components (Blue) that relating more to Taiwan, both have reached a new height in October since the economic recession, and the growing trend keeps going strong. Noticeably, the situation of this industry expansion seems to have rid of the patterned cycle since 2000, and more like the industry boom bubble back in the 90s. Still, whether it would become such a trend still need more observation, but as the private sector investment remains increasing, the boom of tech industry would not suffer the downturn at this moment.

3. Tax Reform will not be a short side for tech stocks, tech stocks profits are still growing fast

Finally, we will be discussing that since President Trump’s Tax Reform made a breakthrough in the GOP majority Congress, the market begins to see tech stocks and the tech industry as a “punished” industry, which is a huge misconception. Obviously, as Goldman Sachs has evaluated, since the real effective tax rate is lower, after the Tax Reform is passed, the overall profits of the tech industry will decrease, unlike other industries (Chart 5). Yet, this does not constitute a reason to look down on tech stocks, how so? 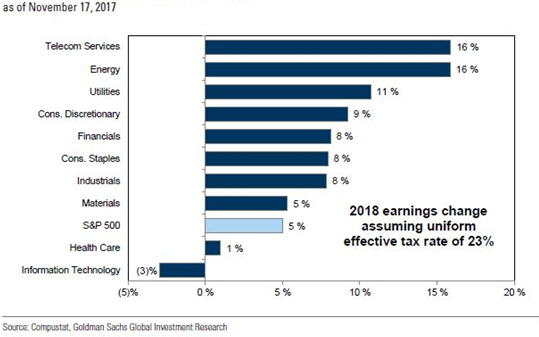 Chart 5: After the Tax Reform, the profits of the tech industry will decrease.  Unit: %  Source: Goldman Sachs

The reason is simple, tech industry is still the one industry that has the most potential in earnings. We can see it clearly in the Factset report, tech industry is one of the few that keeps adjusting the forecast of earnings upwards. As in Chart 6, 7, 8, the forecast of earnings in Q4 2017, 2017 and 2018, the adjusted values have all surpassed the forecast values. The speed of growing earnings of the whole industry this year, is only behind the Energy/Materials industries due to their low baseline last year. Even comparing it to the Energy/Materials and Financials industries (low baseline this year as well) next year, it only falls a bit behind, which the earnings growth is better than the market for two consecutive years. If such trend is solid, then the decline this time due to the market atmosphere, would be a good opportunity to invest. 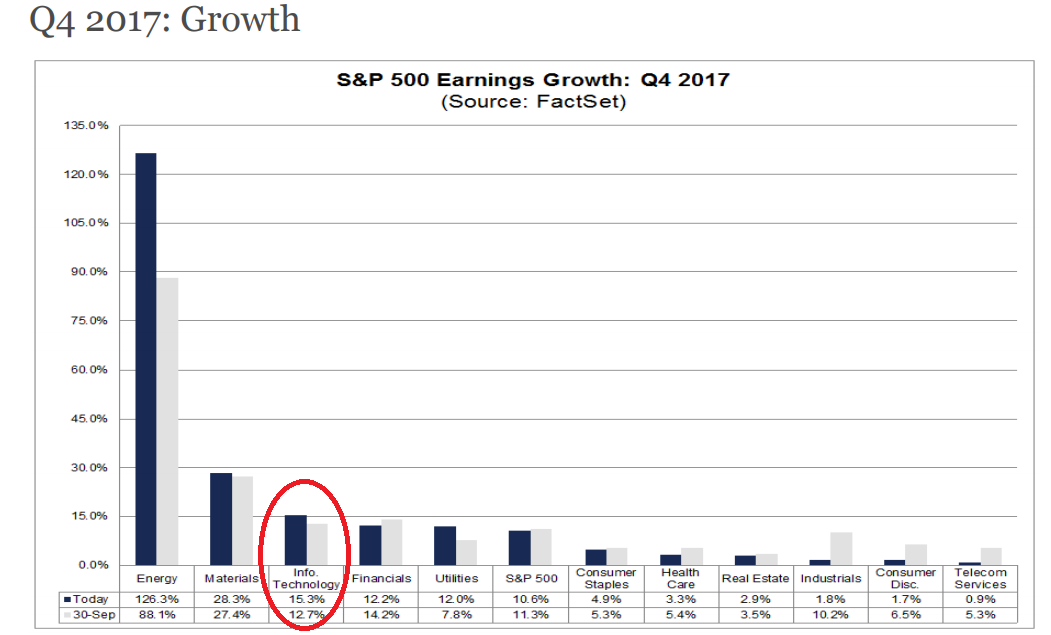 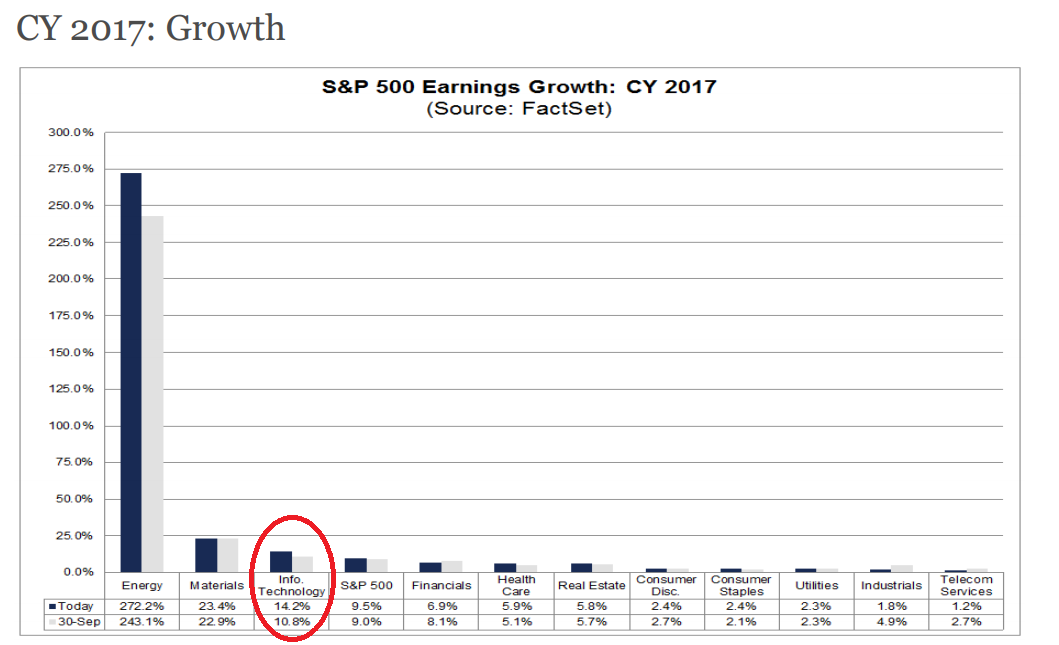 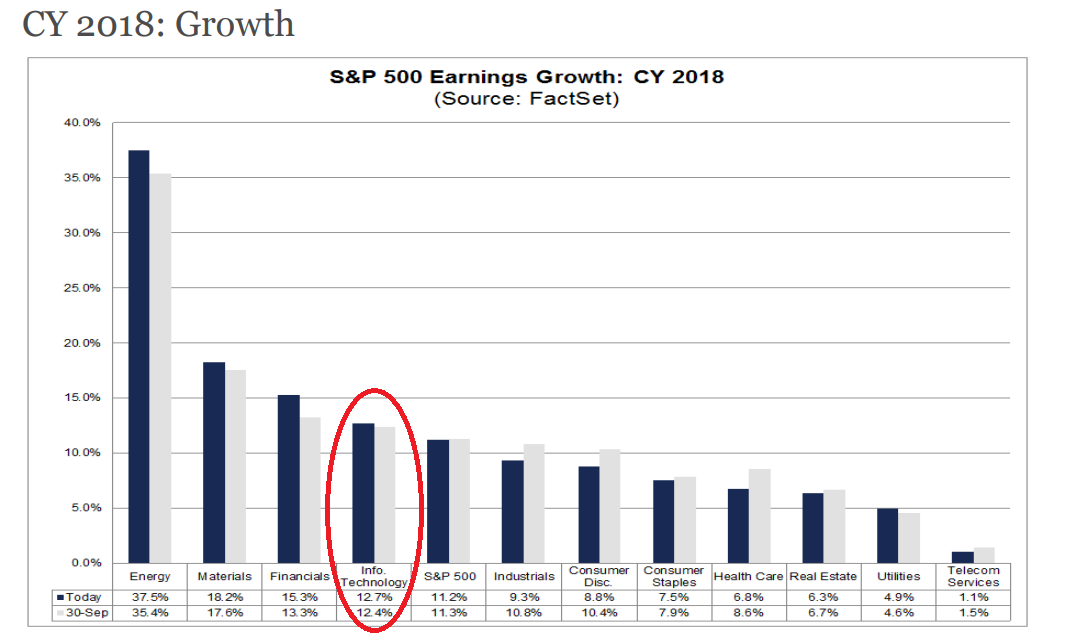 4. Oversea capital reflux due to Tax Reform will significantly benefit the tech industry

The last point that most have neglected, is the tax cut for oversea capital reflux that the Tax Reform planned to do. This could stimulate the tech stocks in both fundamental aspect and issue aspect. Why? The reason is that once the reflux of huge oversea capital occurs, they can only be utilized in three ways: 1. raising the payroll to maintain the competitiveness and attraction of the corporations in the job market. This would then encourage the overall consumer spending, and as we have mentioned in the first part of this article, consumer spending and tech consuming cycle is highly related, which is the first good news. 2. More possibly, the corporations would use the capital to do necessary investments, and as the second part of this article mentioned, private sector investment frenzy and the tech cycle is highly related too, which is the second good news. These two points are basically the trend following the fundamentals.

But the one that has more potential is the third aspect, the stimulation of the issue aspect! When the huge oversea capital reflux occurs, they would likely be used to issue more dividends, apply treasury stock, or conduct business mergers across or within the industries! Then, the ones that possess more oversea capital will be the ones that become the center of attentions in the market next year. 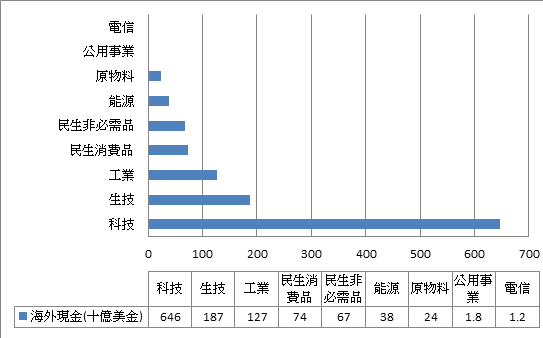 What are the companies? As in Chart 9, the tech industry is obviously the one that has the most capital overseas. Form 1 also indicates that top 10 U.S. companies that hold most overseas capital, there are 6 tech companies (GE excluded) in them; comparing to other industries, they have a crushing advantage. In other words, if the Tax Reform is passed successfully, looking from fundamental aspect or issue aspect, tech stocks should not be the abandoned ones in 2018. More likely, they will be great investment opportunities that investors should wisely invest, and wait for the industry to reach its height to receive a rewarding gain.