Seize the opportunities to invest while it’s low

Entering 2018, though there is the rise of interest rate and tax cut support, U.S. dollars is still performing weak. On the contrary, Taiwan dollars keeps reaching new heights in recent years. The status quo is benefiting the importers and those who are going abroad, while presenting the investors a great opportunity to do long-term investments.

If we look at it from a long-term perspective (5 years), the outline would be clear. Taiwan dollars currently is appreciating against all major currencies (except U.S. dollars) (as in Chart 1). In other words, the price of Taiwan dollars is now at a relatively high spot in the past 5 years. So why do we believe that this year, especially the first half of this year, will be a great opportunity to invest in foreign exchange? There are two reasons. First, from the economic statistics, Taiwan is very likely reaching top of the market boom this year. Second, the future rate rising of foreign exchange is looking better, and they are at a low point comparing to Taiwan dollars, which in long-term would have the opportunity to gain the profits from both exchange rate and interest rate. 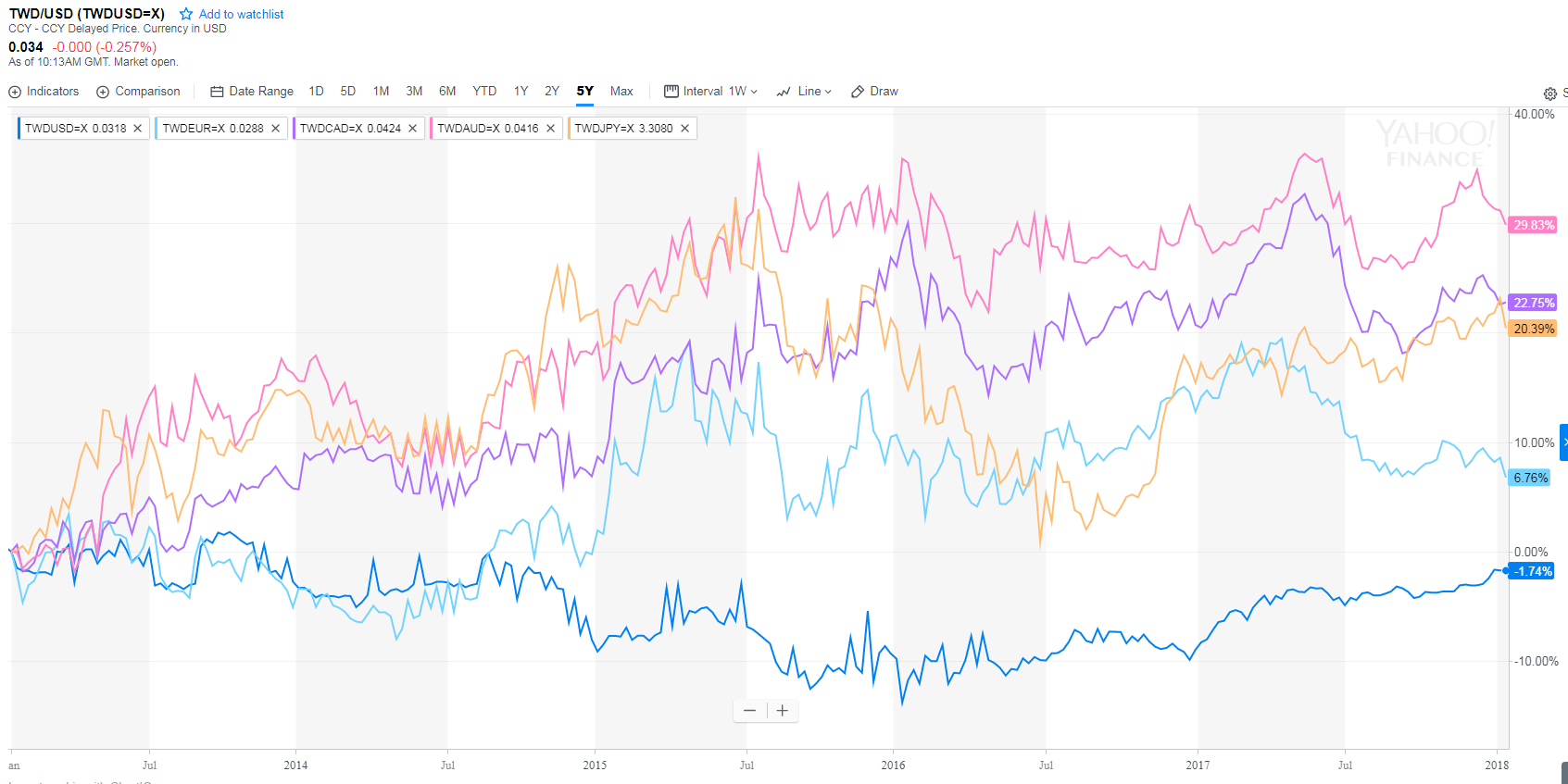 Chart 1: Trend of Taiwan Dollars against other major currencies (Based on the right axis, from top to bottom, AUD, CAD, JPY, EUR, USD.) Performing strong in the past 5 years.  Unit: %  Source: Yahoo Finance

This article will analyze in two perspective telling you: 1. Why this is the year that Taiwan dollars will decline? 2. How to safely do long-term investments in foreign exchange?

The reason that Taiwan dollars would likely decline this year, is based on two fundamental elements in economy:

A. The foreign demands are slowing down, limiting the space for Taiwan dollars to appreciate.

Despite many would blame the Central Bank’s maneuver of the Taiwan foreign exchange rate, this is actually a mistake of reversing the cause and effect. The decision-making of the Central Bank still largely relies on the actual economic status. And over the past 20 years, due to the lack of domestic investments, and the slow-growth of consumer spending, the entire economy of Taiwan begin to rely more and more on outer demands, which are the oversea orders and exports. We can see it in Chart 2, Taiwan dollars is basically connected to the oversea orders’ numbers. The black line and the blue line in the chart indicate the decrease (decline) or decrease (expand) of oversea orders. We can learn that as the outer demands of Taiwan is growing strong, Taiwan dollars would perform a long period of appreciation trend. On the other hand, when the oversea orders begins to fall, Taiwan dollars would start depreciating. From a long-term perspective, the time of expanding is longer, and the time of declining is shorter. Therefore, the appreciation trend of Taiwan dollars would usually go for several years, and the downturn would often come suddenly and drastically. 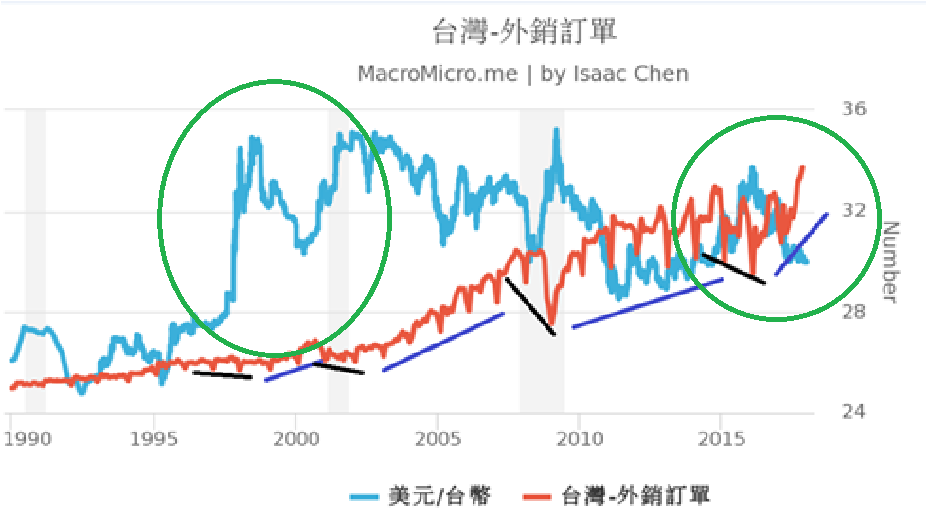 Looking at chart 2, after Taiwan’s oversea orders started growing out of the decline in 2016, and continued to have a strong expanding cycle, in which it can be compared to the tech stocks boom in 2000. Thus, Taiwan dollars began a strong appreciation progress like in 2000, 2007-8, 2010-11. A point to take interest in is that in chart 3, according to the trend of Taiwan oversea orders, there are two markets that need to be watched closely, U.S. and China. Recalling back in April, 2015, we have reminded our readers ahead of the markets that the stock market and foreign exchange market will be facing a downturn, due to the rapidly grossing oversea orders from U.S. (accounted to i6s orders) has reached its maximum and can no longer sustain, and the oversea orders from China keeps falling. Yet, the stock market and foreign exchange market were at an unreasonable high price, hence the downturn would be inevitable. Later, as it soon turned out that in the Q3 of that year, the stock market and foreign market in Taiwan both suffered huge loss. As it moved to October, 2015, when the market is filled with pessimistic views, we sowed to find a light of hope in the oversea orders, which is the U.S. oversea orders YoY has returned back to 0, and as the U.S. economy becomes steady, the situation would not get any worse. And the exports to China basing on the low baseline, is slowing climbing back from the decline. This indicates that even though the entire oversea orders haven’t recovered yet, the leading U.S. and China orders already implied that the growth is coming. Then, Taiwan stock market and foreign exchange market begin performing strong until now.

What about the present? we can see that the entire oversea orders are still rising, but the most important ones like U.S. and China are already at a high position in oversea orders for a long period of time, and starts to show signs of falling. Certainly, the overall numbers are still ideal, unlike 2015 that would have an immediate crisis of declining. Yet, the growth of oversea orders would certainly go into a plateau phase. Under such circumstance, Taiwan dollars would be difficult to remain appreciating.

B. The pressure of inflation in Taiwan is low, and the domestic demands growth is mild, leaving tight space to raise interest rate

The second reason regarding the macro-economy aspect that Taiwan dollars keeps appreciating is that this year the entire economy of Taiwan is still only gradually expanding. Looking at Chart 4, the domestic demands has a nice increase due to the low baseline, but still lacking the energy to boom. When the baseline keeps building up, such numbers would begin to slightly decline in the second half of this year. The inflation has been going up since the price of raw materials are rising, but overall they are still in a low level, and would be hard to keep rising up to 2% level later on. Additionally, real estates and private sector investments are still performing weak, leaving there opportunities to raise the interest rate this year, but probably not too many times. It would likely be once (for 0.25%) or twice (for 0.125% each). All in all, it would be a limited rate rise in this expanding cycle. 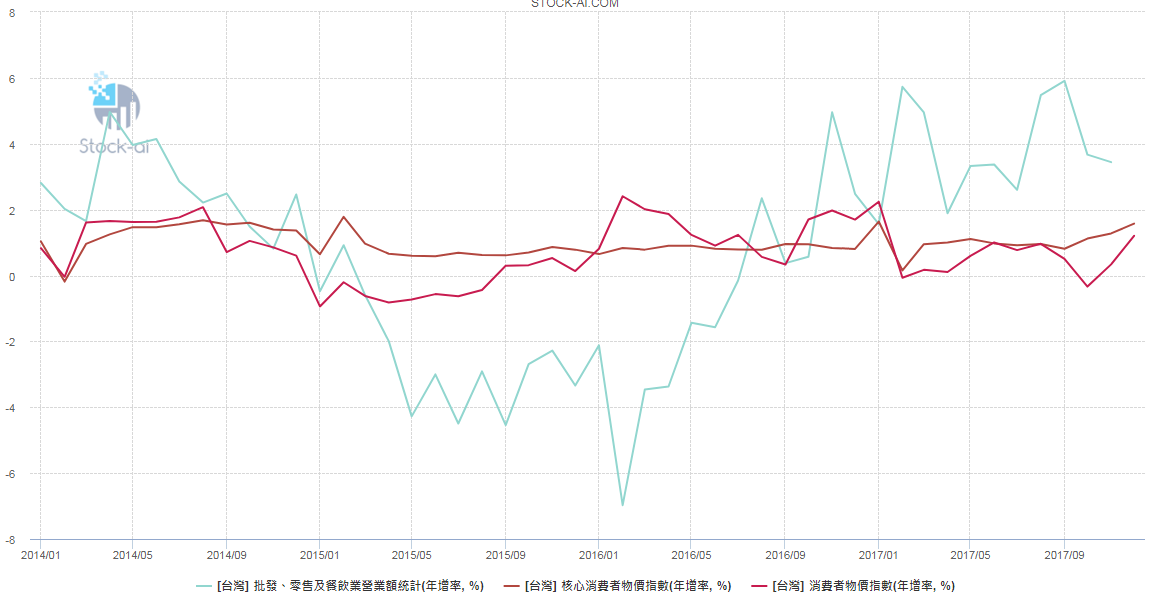 Obviously, regarding the inflation there is one variant. If the price of imports keeps rocketing, it would cause a pressure on the inflation and rate rise for Taiwan. And since Taiwan relies heavily on importing raw materials, such circumstance would hurt the trading environment,  the earnings of the current account would go down. Plus, the inflation caused by the rising price of raw materials usually won’t be sustainable (because once the baseline is piling up, if the growth cannot keep up, it would lead to a pressure on having deflation). The rising price on raw materials would also cause the manufacturing costs to go up in Taiwan, and the core consumer spendings to go down, which is bad for economic growth and corporate earnings. These elements would become a drive to depreciate Taiwan dollars in long term. Simply put, Taiwan dollars this year would possibly come to a high spot as the tech industries and overall economy grows, and then it would linger at the plateau phase for a period of time (about 2-3 quarters), then very likely to start declining afterwards.

As to foreign exchange, what to invest?

What is the preferable choice for investing in foreign exchange? Immediately everyone would think of U.S. dollars. Apparently, as Taiwan dollars keeps depreciating, U.S. dollars going into a steady rise of interest rate, it would seem proper to invest in U.S. dollars. However, from a long term perspective, currencies for raw materials would be a better option. As Chart 1 has clearly shown, Taiwan dollars against other major currencies for raw materials like AUD or CAD, is at a historical high price. But, Taiwan dollars is arriving at the end of its strong performance. As to AUD and CAD, like we have suggested in last June and October as a great opportunity to buy in at a low price, looking at Chart 5, AUD and CAD have clearly started to go strong after falling to a low level, and it is just the beginning of the trend.

The main cause is that both countries are presenting good progress in terms of overall economy and monetary policy. Chart 6 shows that the inflation numbers of Canada is the same as U.S., gradually climbing back to the 2% zone. Chart 7 shows that the domestic demands of Canada and Australia are expanding steadily, allowing both countries’ GDP growing back to 2% level of increase. The numbers are continuing to support that both countries’ troubles in economy are over. Then, the monetary policy or exchange rate would definitely react to such improvements. The historical low price of exchange rate we now see would definitely not remain long. 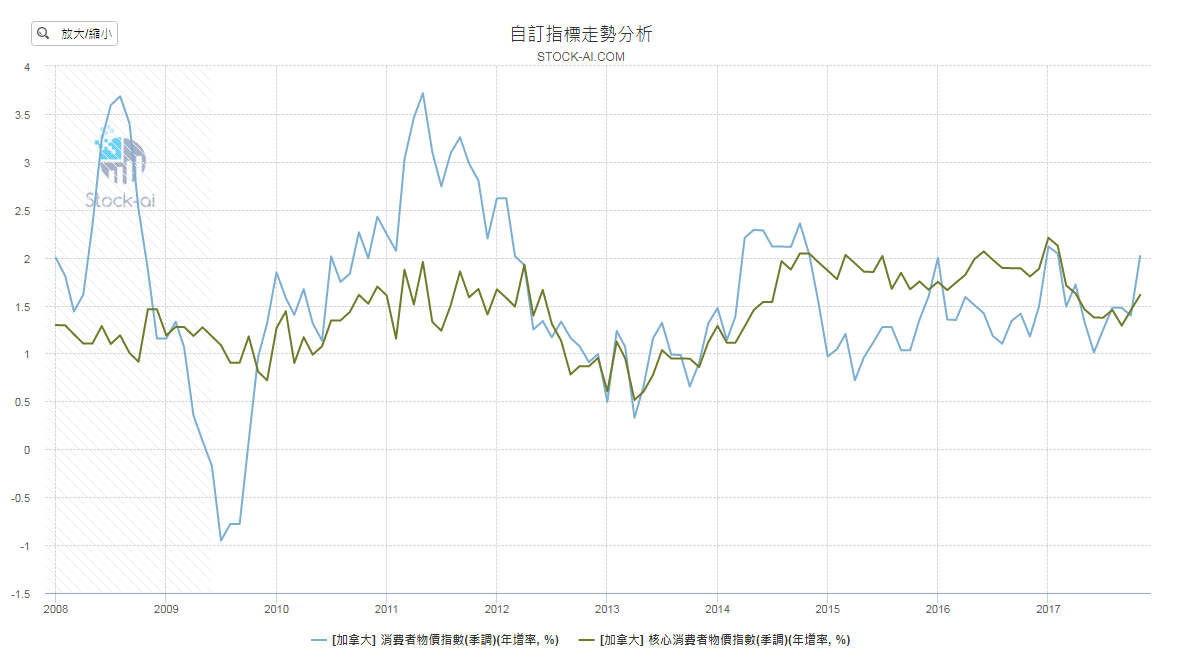 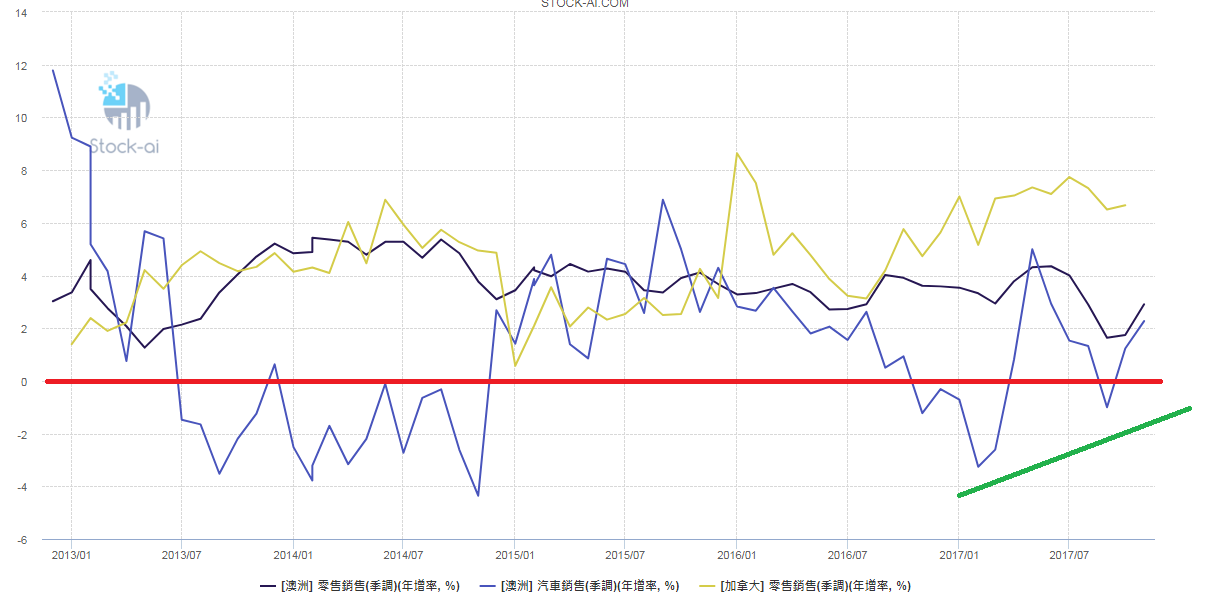 Besides currencies for raw materials, U.S. dollars this year would likely to start performing weak, leading to the opportunity to invest in Euro dollars. We estimated that only 25% of the chance this year U.S. dollars would go strong, and 75% of the chance that Euro dollars would go strong. The main factor at work here is the future of the currencies of both regions.

Despite the bounce back of Euro dollars since last year, in a historical framework, the current spot is only at 1.18 as the price when it first established in 1999. If we apply the interest rate parity theory, the exchange rate would flow from high interest rate (high inflation) countries to low interest rate (low inflation) countries, then currently the Euro dollars are being under-valued. In other words, if the trend of economy growth of both regions remains the same, the fundamental aspect and monetary policy aspect (leveling the gap between the two sides across the Atlantic ocean) that Euro has to reflect, would make it possible for Euro to start a long term boom later this year.

As to the possible outcomes of U.S. and Europe currency environment this year, what would it be? Basically, only few outcomes as followed.

All three scenarios above are indicating that Euro dollars would have a boom. Probably only the next scenario would cause the Euro to go weak.

Based on the analysis above, after the Q1 this year, the chance of U.S. dollar to go strong is only 25%.

Therefore, the targets of investment for foreign exchange this year, should be raw materials currencies first, Euro second, and then U.S. dollars. The timing for investing can mainly rely on observing two events, the first one is the time that FED raises the interest rate again this year (3/20-21). U.S. dollars has been performing weak since the end of last year, and would likely bounce back around such time period, making it a good chance to do foreign exchange (raw material currencies and Euro). The second event would be if the Central Bank would begin the discussion of raising the interest rate first half of this year. When the news of raising the interest rate is out, Taiwan dollars would be expected to show a last rise, and it would be a great time to do the foreign exchange (raw material currencies, Euro, U.S. dollars). All in all, seizing this rare opportunity that Taiwan dollars are going strong, and dividing investments into foreign exchange, would help protect your assets and portfolio from any fluctuation of exchange rates in the future.